👋 Covid Shipping Update: You may experience a slight shipping delay. 📦 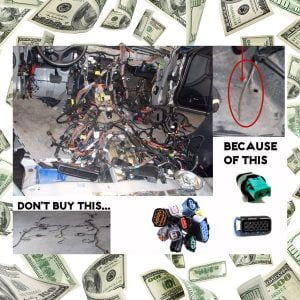 This photo above says it all. But it shouldn’t.

And it won’t because of this 👇 but more on that in a second. 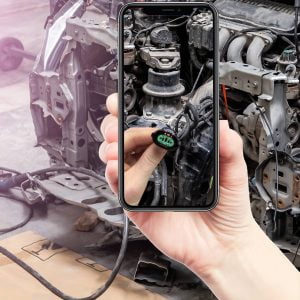 Not long ago we received a call from a body shop who wanted to get a second opinion.  They needed a second opinion on the repairability for a Mercedes fog lamp connector.

The reason: They had just ordered a $5,000 body harness (that was backordered) and would be coming from Stuttgart, Germany.

They were also told it was nonrefundable.

So the body shop decided to give us a call just to verify if the entire electrical wiring harness had to be replaced. They were told that the fog lamp pigtail was not available and non-repairable. The only way to safely repair this Mercedes fog lamp connector was to replace the whole harness.

When we inspected the vehicle (it happened to be located in our backyard; Houston, Texas) we concluded that we could repair/re-pin that fog lamp pigtail, immediately. One pigtail, two wires plus a little labor was going to be around $150, installed.

Let’s knock this out so the vehicle can go home today.

However, it wasn’t so simple.

The body shop just realized that they were stuck. The harness was already ordered, approved for repair and nonrefundable and non-returnable. At this point they felt like they had no choice but to continue waiting on the harness from Germany, thus destroying their severity and cycle time in excess of 45+ days.

The harness was around $5,000 and the labor was intensive, leading to another few thousand dollars. The vehicle had to be completely gutted down to the shell, seats removed and all.

Then…the techs had to have both the new and old harness side-by-side to cross-reference and be certain they were installing the new harness correctly.

No one was really to blame except for the knowledge on who or where they could get thorough and accurate information, tech support and schematics help.

Pigtail and Connector uncertainty no longer

As the collision industry changes, adapts and innovates, FindPigtails.com is doing the same at a relentless rate.

Finding your automotive electrical connector should be the easiest part of your day. Find yours in 30 seconds…

FindPigtails ranks in the top 3% in customer service for our Live-Chat. Share photos, receive tech and schematics support, fulfill orders all in real-time.

A new game-changer was just released.

If used on the front-end of collision repair claims, severity problems can just about become instinct.

See for yourself, here.

Just take or upload a pigtail photo and BOOM your pigtail instantly appears, complete with pricing, availability and the makes/models the pigtail can be used for.

And…if your photo can’t be recognized, no worries. The pigtail smart APP immediately recognizes a “no-match” and in seconds dispatches a Pigtail Pro to Live-Chat with you in real-time.

We make it very difficult to leave without receiving the information you need.